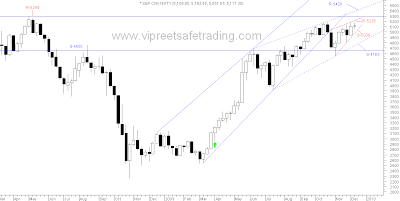 A doji star, well depicted on the sensex,  on weekly charts which signals reversal with confirmation on the next candle. Last weeks range of 5181-4942 was left undisturbed. An "inside pattern" formed , well conformed on the sensex. The positives to be taken was that trading was more concentrated towards the high of 5181 rather than the low of 4942.Oscillators are looking tired. I too am tired detecting rising wedges which are impotent. Anyway spotted another one shown in red . Further direction will be clear after break of last week's range. 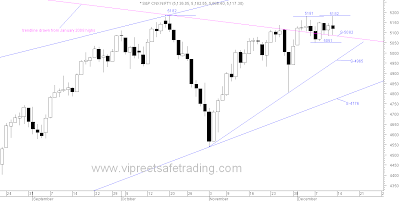 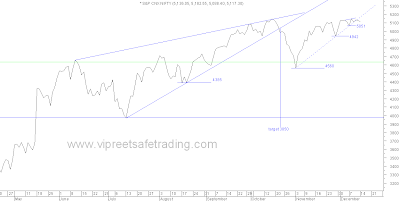 Daily chart  show the third unsuccessful strike at the 5182 level . On the sensex  a lower high was made. Line charts have already broken the recent uptrendline.Obv has broken below  the low made on 7th .All the oscillators have been weak throughout this rally.Macd is ready to give a sell. The uptrend is still intact as all period emas are bullishly aligned. However the  rise from 4538 has been sluggish , having taken more time in recovering to touch the previous high and being unable to scale it.

Advance Decline Line too is sluggish . 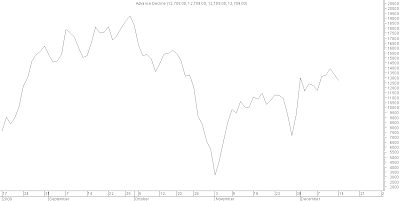 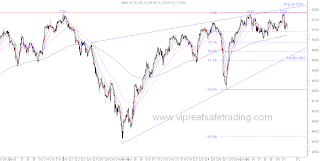 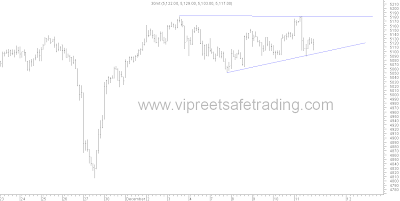 The latest action has formed an ascending triangle, which is a  bullish pattern

Chameleons can trade long with a stop loss of 5095-5105 which are the levels of the lower trendline of the triangle. Positional longs can keep a stop at 5051  which was the last significant low made.

Thank you very much for posting such a detailed review -- and accepting my request for posting AD ratio!

It says much about your passion for markets.

Thanks a ton for your early updation :)

Many thanks Lakshmi, simple and clear analysis, brilliant.

I am thinking Nifty has an outside chance of testing 5038 (although it would be mighty to break the 5080-5050 supports) as it represents 38.2% retracement of rise from 4806 to 5181. It also coincides with channel support you have shown in the first chart.

As someone has said -- one should have an opinion about the markets but respect the tape!

It would be nice if comments can be embedded with charts of our own.

Girish,
you could post it on the discussion forum at http://www.vipreetsafetrading.com/forum/
and alert everyone about it in the comment box

Thanks for your early pudation. It will help small of traders.

Lets see how this week pans out.

MARKET TODAY
Key benchmark indices are expected to start lower tailing weak Asian markets. Investors will keenly watch the inflation data for the month of November 2009 due to be announced by the government today. Investors also fear that a recovery in the economy and a likely surge in wholesale price inflation will add pressure on the central bank to raise interest rates.

16anna.com
this is my blog not an advertising space. please restrict to comments on the markets only