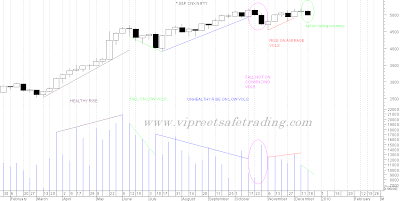 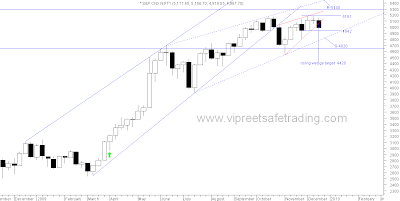 There was no breakout from the " Inside " pattern made last week. An evening star pattern has been formed This is a  bearish candlestick pattern consisting of three candles

A break down from the rising wedge has occured giving a target of 4420.

Amongst  the momentum indicators , Macd is in sell and  the RSI14 has broken the low made on 27th November.  This low corresponds with 4806 low made by Nifty on that date.The stochastics has given a sell once again in the overbought region.

The fall however has been on low volumes which is heartening to the bulls.

A lot of evidence leaning towards bearishness . However one could wait for the Inside pattern low of 4942 to be broken before being outright bearish 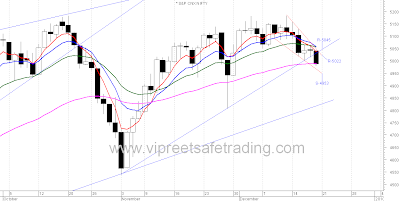 Nifty has broken below the 50 dema. A falling wedge is seen having support at  4953. Breakout will be at 5022. The daily oscillators have all broken below the low made on 27 th November . So a break of the corresponding low of Nifty at 4806 is very possible. 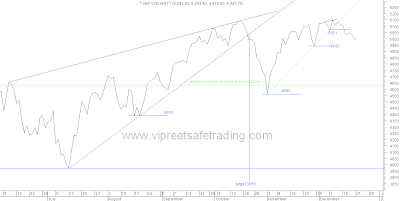 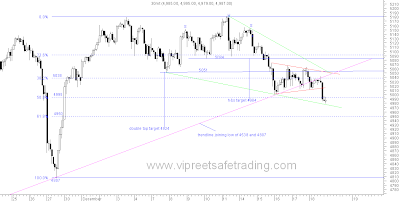 Look to trade short for targets shown in various time frames until we have evidence of the uptrend resuming.

Excellent pivots, I am holding my shorts and will add if the lower 4920 breaks. Thanks for early post much useful during weekend analysis.

With any luck we will see further falls in nfty and a white Christmas in Leeds.

Thanks for the early post. It's really very useful/helpful to go through...

Have a great week.

Dear Madam, I came through your blogspot It is quiet amazing to have complete technicals. I am new to this market and looking for technical analysis. Where can I get the charts from. Could you plese advise me. I am based at chennai.
regds
sethuraman
sethu45@yahoo.com