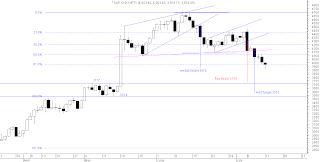 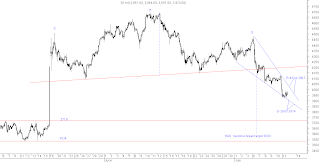 Today was a down day again and we reached the first pattern-rising wedge -target of 3916. The candle formed on daily charts shows support at lows and is a badly formed hammer. So though we cannot term it as a hammer yet it has qualities like a small real body, long lower shadow and a close towards the high of the day, which would goad us to anticipate an upmove.

The intraday oscillators are oversold and beginning to move up. The ROC12 has given a positive divergence and Macd has give a buy signal. On daily charts, the stochastics has given a buy in the oversold region. Macd and Rsi 14 have managed to remain above the supports (shown in charts of post for 13th July). All these points towards a pullback.

Expect a pullback on breakout from the falling wedge shown on intraday charts. targets will be set after breakout. I would lighten shorts and wait for an oppurtunity to short at higher levels.

In case the downmove continues we could expect 3700-3600. For exact targets refer charts.