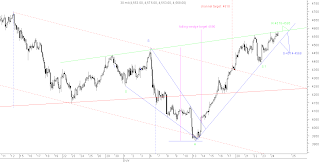 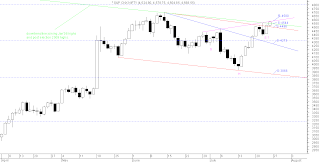 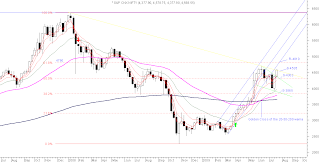 Last week I wrote, "We are once again in the perplexed state whether markets will move up or down. This is the reason we follow price with stop losses instead of making these difficult predictions about the future. Remain long with a stop loss of 4200 for targets of Targets one and two were achieved easily firming up nifty's neck further. Lets see where the nifty stands now.

Moving Averages are bullishly aligned on all time frames.


Bearish Price Pattern
Bullish Price Pattern
Sentiment Indicators
Direction is now UP. So long as the 4500 levels are held we can expect higher levels. If the 4500 level breaks on a closing basis then chances of testing 3918 are high. There are negative divergences on intraday charts which may be signalling that a correction is due. The Nifty is near strong resistances and the 700 point rise from 3918 has had no meaningful correction.

Strong support at 4300. One can look for oppurtunities to go long with a stop loss of 4300.

If the trend is up then can we buy calls of August series?
thanks

The call is to go long with a stop loss of 4300 . So depending on your risk capacity you could take position in calls.

Considering nifty in long term uptrend....can u suggest to buy nifty December CE4800 at 4400 level??? Please comment ur opinion on this.

plz let me know where to keep stop loss.

Guru
I take long term view in order to position myself today. but taking view on december calls is not my way of trading as of now.

Abhishek
I find it difficult to answer questions when positions are taken against the trend. However 4693 was the previous top. So if it is crossed decisively we may be in a very bullish uptrend. you may then decide to cut your short.