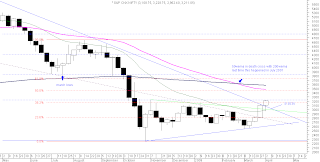 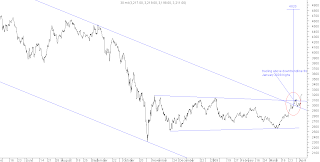 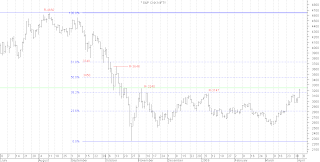 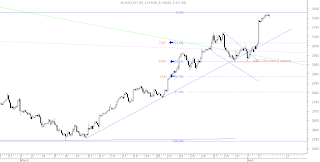 Forcibly closed my positions on 1st April for the freak out holiday I took and see what I lost out on! Anyway, no regrets , as I had a good holiday and closed my positions with profits. Also satisfied that my advice for thursday, 2nd April, was right and so did not mislead my followers.

"So we have more points for a bullish case ! All that the Nifty needs to do is cross 3123 and the downtrendline which is at 3086 for tomorrow on the Daily charts.
Tomorrow is the last day of the week and the level of the January 2008 downtrendline on weekly charts is at 3070. The triangle upper trendline level for the week is at 3010. So watch these levels for taking a call for next week".

Well, we got more than what we asked for. The score was fascinating ! Now let us analyse point wise.

Bullish Case:
Bearish Case
We are more bullish than bearish. So no short positions till we get a proof of correction/resumption of downtrend. The channel breakout target shown on the 30 minute Line chart is 4820 and last major high at 4650. Looks like we will finally make it to those levels. Meanwhile , look for bearish divergences and corrections to reenter Longs.
Stop Loss would be the 2965 level which is the last low made and is the 38.2 % retracement level of entire rise.

Weekly level for the breakout failing is at 3035.

Rest is all marked out on the charts. Am too tired to write it out and spoon feed my readers.

Thanks feels good to be missed !

Good Postings - but want to clarify few points.
you say bear market rally but target 4820 , if we go to those level -still u think its bear market rally.
The target you have given on fib(4820)levels -50% levels are placed at 3450 -do u think that mere getting past the 38.2% fib levels - we are a bull trend.
Are we not forming a sharp rising wedge- isn't it gives some scare?
Thank you

Your blog is really crisp and to the point. Thank you for providing us this blog. For me, it's a daily ritual to go through this :)

In the weekly chart, you have mentioned about the death cross. Could you please explain what this means.