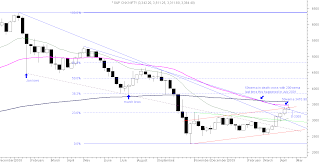 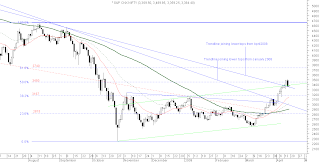 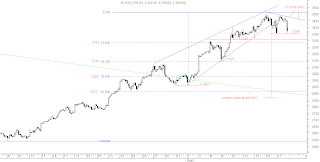 Once again we have a white candle on the Weekly Charts but with a difference. This candle signals selling at higher levels. It is a shooting star. The Daily charts too have formed a shooting star on 17th. This candle adds weight to the bearish engulfing pattern formed on 16th.

A shooting star is ominous when formed during an uptrend (minor or major). At this point, it appears as though the longs are in complete control. On the day of the shooting star, the rally continues in full force but soon , however, profit taking ensues. The stock closes near the open, forming a small real body. A shooting star therefore has a small real body and a large upper shadow. Typically, there will be either no lower shadow or a very small one. The candle warns of the end of an uptrend. The characteristics are,
A lot of indications are biased towards the bearish side.

The weekly charts have support at 3308 from the Down trendlines. Resistance from the red channel is at 3405.

The action on 17th formed an inside day--explained in my earlier posts. So trade on a break of low or high made on the 16th. Trade long if breaks aboved 3511 the high of 16th , and trade short if breaks 3354 the low of 16th. Trade with appropriate stops as bearishness has to be proved by breaking the uptrendline from 2539 and bullishness will prevail only on scaling 3511.

Important Supports and Resistances shown marked on the charts.

Thanks for your brief explanation...

The way of explanation about the candlestick pattern is the advantage for your readers to take notes...about that

thanks for your comments rajesh and sujatha

rani patel
i am honored but afraid of having to live up to this expectation. thank you

What i feel is LAKSHMI is LAKSHMI...individuality is there, there is no confusion like EWT counts, if or but...pls don't mistake me... i am not against EWT, problem is i don't understand...Vivek'ji is king of EWT..

Any lay man can follows lakshmi's chart and commentry and can understand easily..

Anyway thanks to Rani

yes sujata, though i feel honored of the comparison, i too dont know much about elliot wave and like to keep the analysis simple.