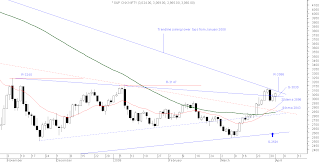 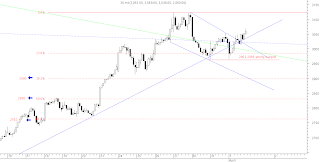 Not much change in the analysis since yesterday. The Nifty teasing has not ended yet, though the trend was a gradual "up" most of the day. At such crossroads, I think it is easier to divide the analysis into bullish case and bearish case, as I did yesterday


Bullish case
Bearish case
So we have more points for a bullish case ! All that the Nifty needs to do is cross 3123 and the downtrendline which is at 3086 for tomorrow on the Daily charts.

Tomorrow is the last day of the week and the level of the January 2008 downtrendline on weekly charts is at 3070. The triangle upper trendline level for the week is at 3010. So watch these levels for taking a call for next week .

Will be away for a few days, but will try my best to post a weekly analysis.

HI,
Sorry for posting an unrelated comment as this was the only place where I could try and contact you.
I want historical data of Saw Pipes (new name is Jindal Saw), where could I get it from? On the Nse site we have only the present data and not the data with the old name. Please mail me at sudhin_bathija@yahoo.co.in.
Thanks,
Sudhin

sudhin
have just got back from my holiday and am still to start getting back to work. If you need historical data
you have to subscribe to some EOD provider.
Lakshmi