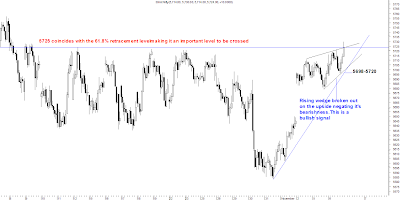 The Nifty brokeout of the 5725 resistance level but could not close above it.It still proves a difficult level to cross as depicted on half hourly charts. The range has been broken on line charts which means it has done so on a closing basis which is a poisitve.The bullish candle after two dojis shows bull dominance.

The rising wedge shown on the second half hourly chart which is a bearish pattern has broken out on the top.This is a bullish signal showing bears could not take advantage of it.  The potential Inverse head and shoulder  seen forming has the neckline now at 5725.A close above this level will take the Nifty to 5845 levels with resistances at 5760-5815.
Support at 5655 and gap support at 5679-5545 if broken then the low made at 5583 can be retested.

Subscribe to my Daily Newsletter by writing to vipreetsafetrading@gmail.com