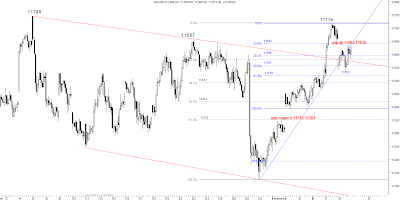 An Inside Day is a day that has a lower high and higher low than that of the prior day.Simply put, the high and the low of the previous day are not violated. Inference of this is, the market may be catching its breath before another up or down day. It could be indecision between bulls and bears . Or, it may be hesitation by the market players who are wary whether the current trend will continue .

The "Inside day" can become quite powerful when it occurs during a long-lasting trend, and can therefore signal a reversal. Could this be applicable now? We cannot say till confirmation of other signals.First signal would be breakout above or below the high or low of the pattern which is 11719 & 11519 respectively.
The trend is still up and will be in danger only if the recent low of 11125 is breoken decisively.