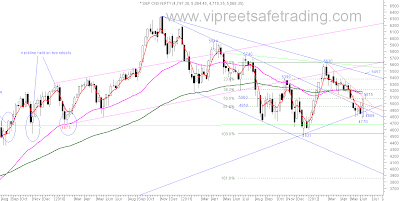 Last week's identification of the bearish engulfing pattern as a potential reversal pattern proved right - Refer to the post for the 4th of June.This week's bullish engulfing pattern proves that with a close above the downtrendline from November 2010 highs. Stochstics moving up in buy mode from oversold zone, Rsi14 moving up once again and Macd giving an uptick are all pointing to further bullishness.A close above the 40 and 100 wema at 5149-5179 and strong resistance from the downtrendlines at 5075 and 5457 will be awaited to declare the trend bullish once again. 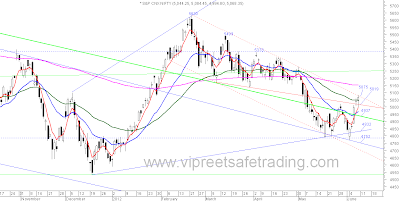 Daily charts show an Outside day pattern which is a one day reversal pattern.Occuring at the downtrendline resistance the pattern could prove bearish.Stochastics in the overbought region supports a pullback.Support levels marked on charts and fibonacci retracement levels marked on the half hourly chart below. 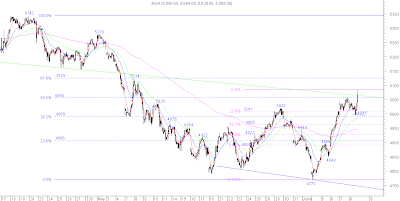