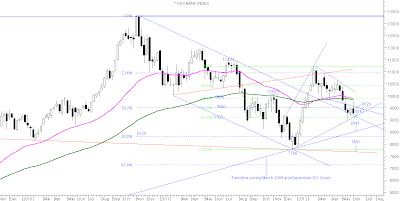 Weekly charts show a bearish engulfing pattern with a higher high and higher low on above average volumes.The Engulfing Bearish pattern is commonly found at market tops and at the beginning of a bearish price decline and is a bearish reversal pattern. 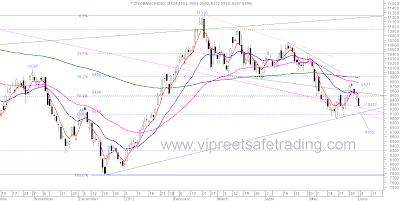 The daily chart shows the week's action with an evening star pattern making a lower high once again at 9783  and successfully taking the Bank Nifty down to almost touch the uptrendline from 7766 lows.Oscillators show more weakness may follow. Key support at 9105.Bullishness to return only on scaling 9783.