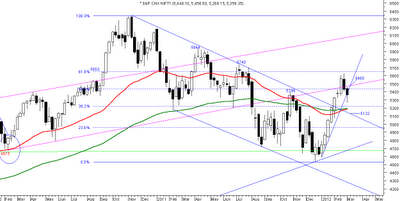 Bullish Indications : The  Nifty is trading above the 40 and 100 wema.Breakout from the downtrending channel since November 2010 maintained.Macd continues to give an uptick above zero line.Weekly candle with long lower shadow indicating buying at lower levels.
Bearish Indications : Uptrendline broken and weekly close below it. 40 and 100 wema bearishly aligned.Stochastics moving down from overbought region in sell mode.Rsi14 has started moving down without reaching overbought zone implying lack of strength in the uptrend.
Daily Chart 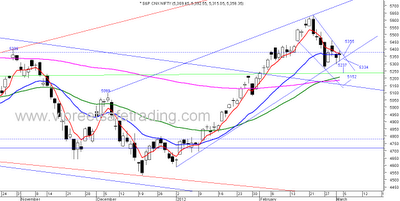 Bullish Indications : The support line of the rising wedge was maintained.A higher high higher low candle was formed.The candle was a doji which may prove to be indicating a reversal in the downtrend.All demas are bullishly aligned.The fall is within a flag formation which is a bullish pattern.Stochastics moving up from oversold region in buy mode.Rsi14 has made a move up again above the 50 mark
Bearish Indications : Macd continues to give a downtick.Close below the 5 and 20 dema.
Half Hourly Chart 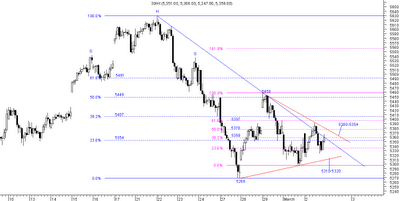 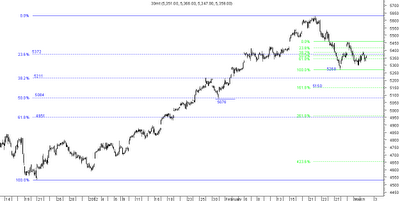 Bullish Indications :  Low of 5268 made on the first day of the week maintained.Fall till now has been just around 35 % indicating the fall is just a correction.
Bearish Indications : Recovery attempts  after the initial fall to 5268 have been met with selling at the 50% fibo level first at 5458 and then at 5392 as shown on Half hourly chart I, indicating more fall.Oscillators too are making lower tops showing weakness.
The Nifty is in a short term downtrend which is to be treated as a correction as of now. Only a fall below 5100 would put the uptrend in danger.The mantra therefore is a buy on dips with stop loss of 5076.