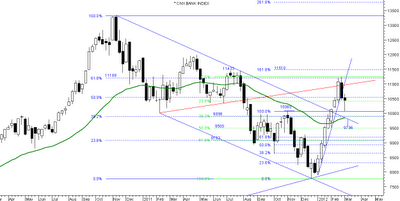 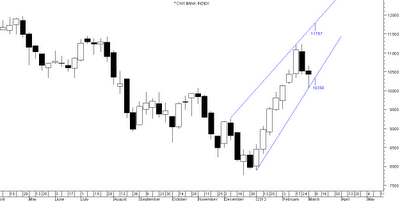 Bullish Indications : The Bank Nifty corrected slightly below the breakout level of 10080 but found good buying support leading to a long lower shadow. The close was at the 23.6% fibo level.Breakout from downtrending channel maintained.Macd has given an uptick once again and Rsi14 has moved down but above the 50 level.
Bearish Indications :Uptrendline broken. Inability to maintain above the red trendline.Stochastics too is moving down in sell mode from the overbought region.Rsi14 turned down before reaching overbought region showing lack of strength.Rising  wedge forming with support at 10350. 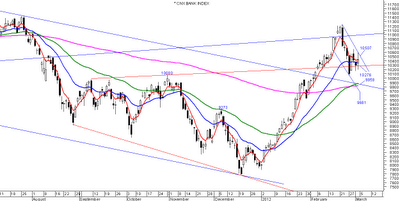 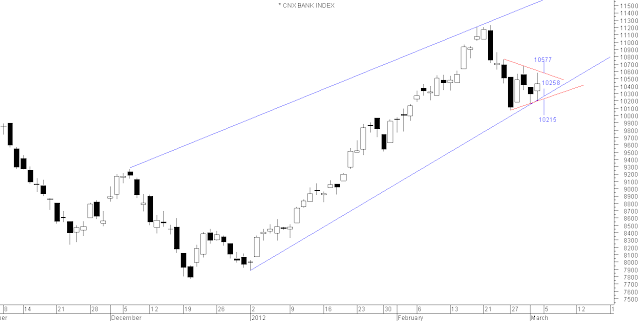 Bullish Indications : The support line of the rising wedge was maintained.Breakout above expanding triangle and downward falling channel maintained. A higher high higher low candle was formed.All demas are bullishly aligned and close above all demas.The fall is within a flag formation which is a bullish pattern.Stochastics moving up from oversold region in buy mode.Rsi14 has made a move up again above the 50 mark
Bearish Indications : Macd continues to give a downtick.ther rise from 7766 is within a rising wedge which is a bearish pattern with support at 10258.

The fall from 11226 seems to be a correction to the rally from 7766 lows as of now. The flag pattern should normally breakout upwards which would then be the next leg up of the rising wedge.The triangle formed, shown in red, indicates indecision to break upwards and out of the flag or downwards to form another leg of the flag. 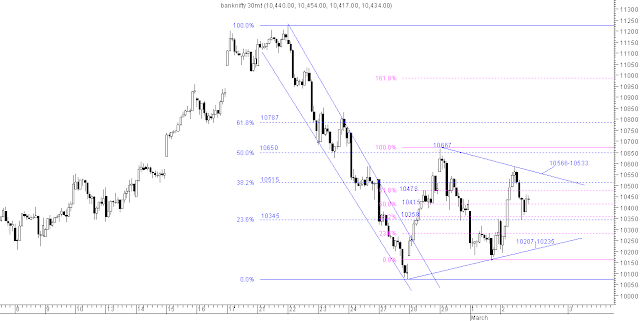