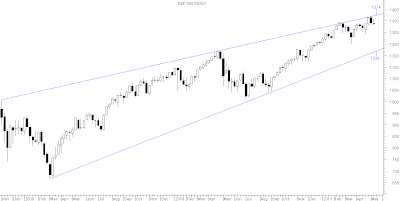 Weekly charts show a bearish candle which is a near doji with a long upper shadow. The candle also formed an Inside day. Oscillators exude weakness after showing negative divergence.The trendline resistance at 1374 may prove difficult  to cross for the time being. 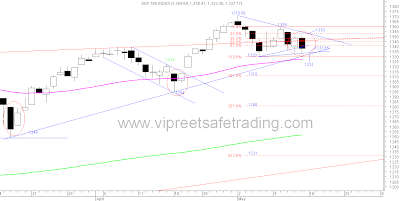 Daily charts too formed an Inside day which would be bullish for the S&P500 as per historical evidence. Read post of 18th March --   http://vipreetinvestments.blogspot.com/2011/03/s-500-update-18th-march-2011.html
The pennant broke on the down side as mentioned in my post of 12th May. Support comes at 1332. If held, then the Inside pattern magic may get the S&P500 to rally once again. Keep a strict stop of 1329 on longs.