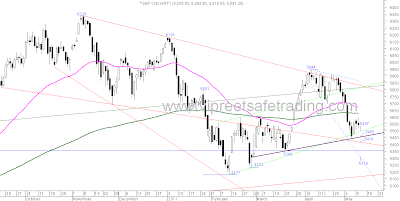 The tussle between bulls and bears continues without an outcome. Though a higher low and higher high was registered, it is advantage bears at the moment with trade below 200 dema. The expanding triangle in red has depicted enough bearishness and the next leg down could have some unbelievable targets which should be visited after the low of 5177 breaks.
Meanwhile other bearish patterns like the head and shoulers pattern ,with the neckline in dark purple , if broken can give a downmove of around 550 points from  breakpoint.
Half Hourly Chart 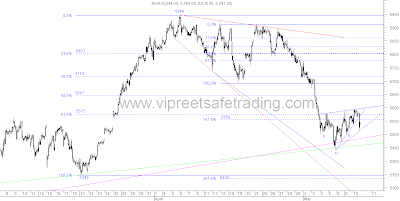 The pennant broke down as expected but the bears did not capitalise on it so have redrawn the support line which supports at 5520-5540 for the day.A break down would give a move of 260 points .The head and shoulders pattern from the bullish angle,mentioned yesterday, is still valid with a move of around 140 points on breakout.