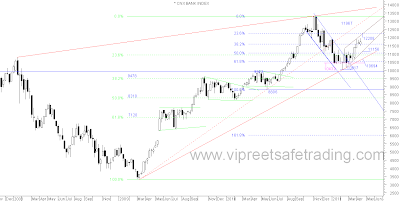 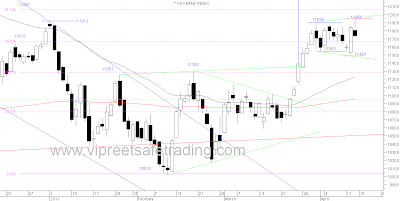 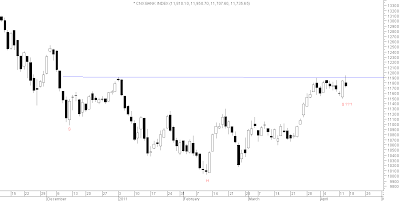 The weekly candle formed an Outside Day.This could prove bearish having occured after four weeks of rally.Last week had formed an Inside Day which was broken on the upside intra week. This Inside-Outside formation shows confusion which is shown vividly on the daily charts in the form of an expanding triangle or megaphone pattern, shown in green.This is bearish.The weekly is also seen forming a bear flag  which should normally break down and resume the downtrend.

On the other hand the daily charts show a potential bullish head and shoulders pattern being formed. Neckline was breached intraday yesterday. A break from the neckline could give a move of 1900 points.

The trend is up with all demas and wemas bullishly aligned.On the other hand the Bank Nifty is struggling to overcome the 61.8% retracement of the fall from all time highs and the daily oscillators and OBV are showing a negative divergence.  Resolving the megaphone yo-yo will give a sense of further direction.Trade light till then.