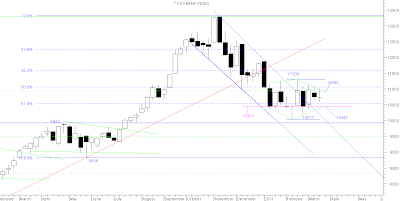 Bank Nifty continues to move within the pennant formation pointed out last week. A Bearish Pennant  follows a  fall in price, and consists of two converging trendlines that resembles an equilateral triangle.The Pennant appears as a sideways move, rather than one with a downtrend or uptrend. It is a continuation pattern and almost always prices break in the dirction of the existing trend , which is a downtrend in the case of the bank Nifty. Oscillators are weak supporting the bearish view.Support has moved up to 10443. 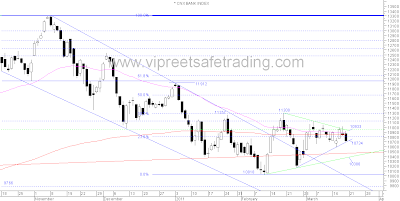 The daily charts show a bearish follow up to the shooting star candle of 17th March, in line with the pennant discussed above. Support taken on the blue short term up trendline.

Supports and Resistance marked on charts.