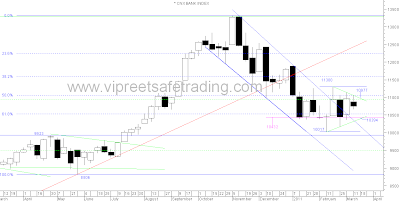 Pennant formation shown in green. A pennant is a small symmetrical triangle and is a continuation pattern, indicating, the downtrend may resume with  a breakdown from the pattern.Support at  10394.
Daily Chart 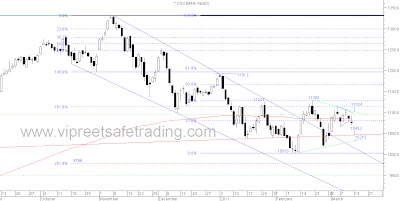 On 10th I wrote, Smaller triangle formed since 4th March from which a breakout should occur tomorrow . The triangle broke down sending the bank nifty once again below the 200 dema. The 50 & 200 dema are yet to give confirmation of the downtrend as they are still bullishly aligned.The short term 5,10 & 20 demas are also bullishly aligned with one another.
The daily shows the magnified form of the pennant. The downtrend seems to be resuming. and will intensify once the support of 10315 breaks.