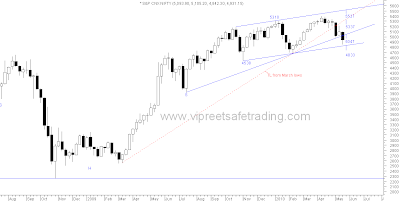 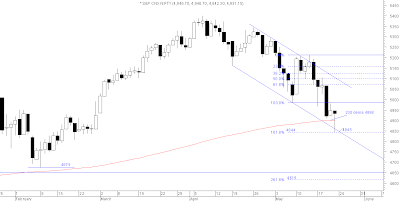 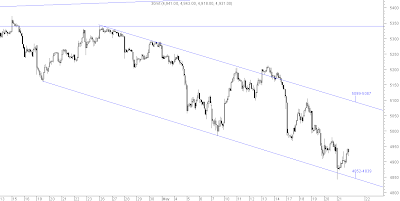 The Nifty is in a downtrend for the sixth consecutive week. Oscillators have started showing positive divergence . Stochastics on the weekly and daily charts have reached oversold zone. The daily charts show a hammer formed at good support. The Bullish Hammer Pattern is a significant candlestick that occurs at the bottom of a trend or during a downtrend and it is called a hammer since it is hammering out a bottom.The hammer has been  formed after violating the 200 dema  intra day and  recovering sharply from the lows of 4842.

The above indications point at the probability of  a short term bottom having been formed  at 4842. Hammer patterns need confirmation with a bullish candle the next trading day.Watch out for a bullish day on Monday.

Your half hourly chart analysis is very good. Since my charting software has only 2 weeks, I didn't get that downward channel.

Hello mam, I am trading in nifty. Could you please guide me how to trade using your levels? It would be more helpful for people like me if buy/sell levels for next day are updated.

Waiting for your reply.