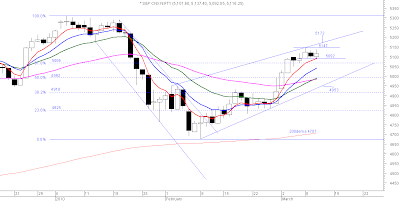 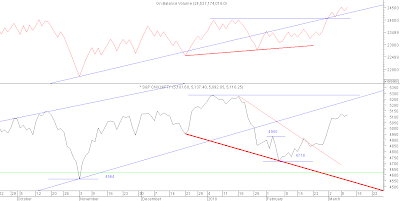 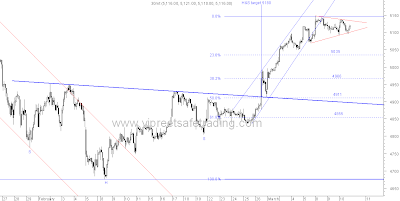 Markets are  giving mixed signals. New longs taken on the break of the flag formation would have been caught on the wrong foot with a false breakout , only to turn up once again.Look for short term direction on break of 5147 -5092 range.

The trend however is up . So continue longs  with a stop loss of 5050 . Longs with a longer term view should wait for a break of the uptrendline from 4675. New longs to be taken only if breaks out of the triangle on the upside.

Aha, what a confusion state this Nifty is showing . like our politics :P

MADAM,
I AM A MEMBER OF BOB. KINDLY GIVE ME FULL TECH ANALYSIS ON SHREE ASHTAVINAYAK CINE VISION. PRESENTLY THIS SHARE IS SHOWING HUGE VOLUME.
YOUR NIFTY ANALYSIS IS VERY GOOD.
THANKS.

member of BOB? also i dont track ashtavinayak. why dont u put ur query on the discussion forum? you may get the answers