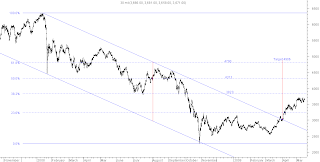 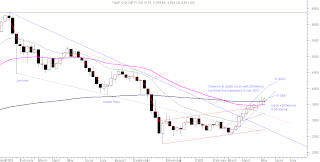 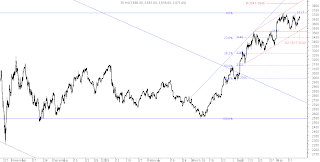 So the fog has cleared and the sun is shining brighter than expected. The market action showed that the outcome of the elections would be good was being discounted, as it rallied in anticipation and closed positively for the tenth week in succession.Now the question on every trader's mind is Gap Up opening and how much? I dont believe in wasting time on uncertainities. So back to technicals and logic.

I had mentioned yesterday that the stochastic on daily charts suggested that there is no inherent weakness in the market, and the market rallied by 78 points inspite of uncertainity of the election results. This proves the bullish bias that the markets are having .

The Weekly Charts look strong with the 200wema scaled for the second consecutive week. Ten weeks into the uptrend. Oscillators show strength and room for more upside. The Macd is now moving up above the zero line. The risng channel has resistance at 4082 and support at 3691 for the week.

The Daily charts have shown negative divergences but no other bearish signs. Fridays candle managed to once again close within the rising channel. Support at 3534 has strengthened and only a break of this support will call for any caution.Nifty has been moving in a sideways range between 3534 and 3717 over the last couple of weeks. On 13th I wrote, "Congestion zone of 3534-3717 continues with volatile intra day moves. In the ongoing rally we have seen trading ranges after sharp upmoves and then a breakout from the range to make new highs. I have marked these ranges on the daily charts . We have yet to see if this range too is going to give us a new high or break down . Break any which way would give a move of 183 points (3717-3534=183)." This view still stands. So the first target could be 3900 (3717+183=3900).

Other targets are marked on the charts. More after we see tomorrows action as markets may behave irrationally .
The 4900 target has been shown on bar charts . Earlier I had shown this on the Line charts as 4800.

I was warning about having hedged positions as moves at such times are highly unpredictable. Hope you all took heed..

This is in reply to queries about what to do about short positions : I would cut my short and take losses rather than get emotionally drained. Being a chameleon pays

What can you do if you dont get a chance to square off and the FII buys in sgx and sell here? Well my advice to people is keep away from fno, no matter what your gains may be,WHAT WILL U DO IF U R CAUGHT LIKE WE WERE CAUGHT TODAY AND POSSIBLY TOMMOROW? HERE NO TA FA WILL WORK ONLY MONEY POWER.
Mam I'm sorry if this is disturbing you can delete the same if it goes against your thoughts.

Thank you rakesh for your confidence in my analysis.
Men I had mentioned time and again to be hedged on any position. If you had done that you would not have to face such tension

Mam, i don't have any doubt on your analysis/reasoning so let me make that clear. I alone am repoonsible for this mess in which I am in, I have also given very similar levels(4626) that you have given for tommorow 19th, but is this fair that someone can trade in sgx and cover here while we just have to be at their mercy? simply put IF ANYONE HAS THE MONEY POWER TO WITHSTAND THIS FOR ANOTHER 1500 POINTS on the nifty he will defnitely get his money back, and how many were able to book profits? Imagine that you are hedged but the mtm is so much that you have to pay up just because u cannot offload that is the point that is all. Hope I have made my point of view clear here.