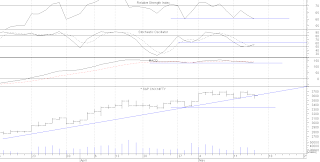 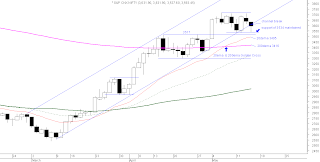 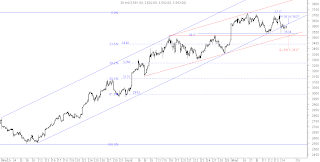 I mentioned yesterday, "If, however, the Nifty plummets the day after the harami candle takes place, then there is an increased likelihood that a Minor top may be in place.Let us see whether this bearish signal works its way to a breakdown".

Well, the nifty plummeted on open but soon managed to rally towards yesterdays close.Then down again and then ranged. The price action was indicating more confusion than a definite move in the downward direction. So it was a down day BUT held the four day support of 3534. Confusion again in coming to a conclusion whether one should be bearish or bullish. At crossroads once again.

Well the rising channel has finally been violated. So that's bearish.We may take some time to cross the high of the rally at 3717, and the channel break target is 400 points --3603-400= 3203 -- as mentioned earlier. Remember : targets and technicals don't work at newsy times --- election results are due. Have put up the sensex chart which shows the gap down opening from the channel more vividly.

Negative divergences persist.All oscillators are moving down except the stochastic which on daily charts has given a buy once again and moved above the 50 levels. This shows that the moves though appearing weak and frustrating may not be all that bearish.This strengthens the view that the trading range of 3534-3717 is not yet violated and we have strong support at 3517 to 3300 so the Nifty may not really tank.

You can read interpretation of stochastic oscillator here http://vipreetinvestments.blogspot.com/2009/02/technicals-for-24th-feb2009.html .


Further strong supports are at 20dema at 3495 and 200dema at 3416. The money waiting on the sidelines may provide the required cushion at these levels. We must keep in mind that the weekly (intermediate) charts are bullish and the monthly charts too show signs of recovery. Thus I would use dips to get into the markets and hedge it appropriately for any unpredictable falls.


Conclusion. Remain hedged on longs and neutral on speculative positions till the fog clears.

HI,
Now that the Congress is going to form the govt. what should a person who is short on the markets do now? Media is saying open on upper circuit filter etc. So will technicals work in the immediate future?

ma'm,
Shall I book loss in shorts in opening itself?