Analysis that keep's you on the right side of trades. That is just why you need to subscribe to my views.Write to vipreetinvestments@gmail.com to subscribe. It is a paid subscription because a lot of thinking and study goes into giving a view. 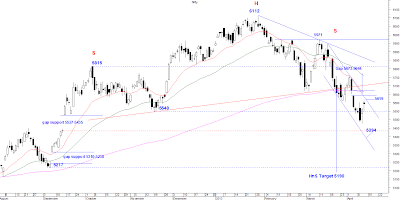 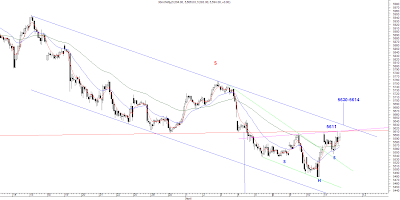 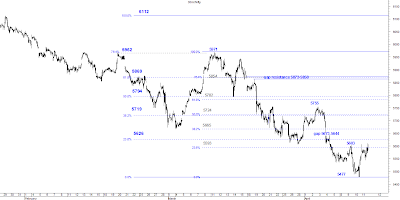 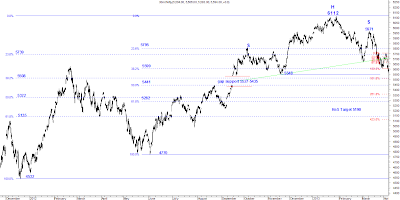 Nifty made a bullish gap up opening and managed a close at those levels. Selling came in after some sideways move in the early part of the session which was bought into forming a long lower shadow  indicating bullishness may sustain.Gap at 5435-5527 has only been partially filled which is a positive and supports a pullback.

A probable inverted head and shoulder has been formed, shown on the half hourly chart,  with the neckline (pink) close to the bearish head and shoulder neckline(red).A cross above 5611 will confirm a breakout and give a target of around 5725 which is the 50% retracement level of fall from 5971.

The 20 Ema has broken below the 200 Ema after crossing above it in July 2012.This is a bearish sign and all pullbacks need to be seen with suspicion.The neckline of the bearish head and shoulder has resistance at 5705.Falling channel shown has resistance at 5619.Other resistances are there at 5611-5644-5665-5673 on the way to the above mentioned target.

The candle formed today might as well be a hanging man pattern which is bearish. In case the top of the candle at 5611 is not taken out resumption of the fall is highly probable.Supports are at 5544-5525-5478.
The trend is down and pullbacks should be used to sell into until more evidence is available that the uptrend is resuming.
Write to vipreetinvestments@gmail.com to subscribe