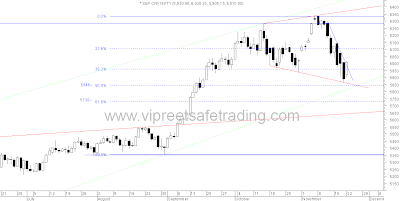 Finally a higher high higher low candle which has also broken out of the down trendline drawn for this fall. Today's candle was a huge bullish candle giving a rise of 120 points.The close was above the 50 dema and the 23.6% fibo retracement level, which is a positive.

Moving past the 6144 level, which was the last peak made on the 16th November, will be the confirmation that the uptrend may have resumed. The formation of an expanding triangle, which normally should have three peaks has been shown in red. This leg up from the low of 5863 could lead to the third peak which would then have to be higher than the earlier peak of 6338 to conform to the pattern. 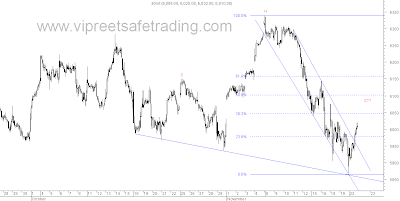 Looking at the action in a slightly different way, I see a  bearish  head and shoulder pattern which has a neckline sloping downwards.The upmove from 5863 would then form the right shoulder.

So the upmove from 5863 can either form a right shoulder or else move higher to form the third peak for the expanding triangle.