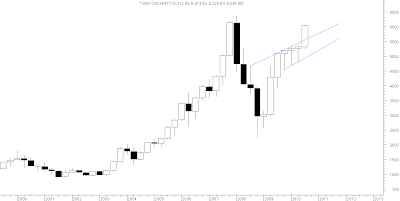 Bullish breakout from the rising channel.Volumes were low and have been falling since June 2009 quarter. Stochastics has reached overbought region and is flattening .6135 is a very strong resistance which is the highest close on the quarterly chart. 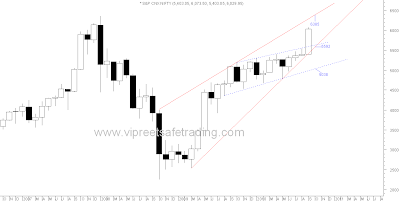 Monthly charts look extremely bullish with a breakout from the rising channel which was an almost sideways movement with an upward bias for 15 months !  Volumes were just average and the Advance Decline line negative making one cautious on the breakout. ROC12 and Stochastics are in negative divergence.

I have redrawn the rising wedge which now has Resistance at 6385  and Support at 5592.
Enjoy the heady ride up till the break of the support at 5592.