The week ended with a bull candle on avearage volumes, confirming the low, 4538,  of the "near" hammer pattern of last week as solid support. Among the weekly oscillators the Rsi 14  is  showing strength by moving up without touchinh the 50 level. The stochastic too has moved up and given a buy without reaching the oversold region.The Macd which is more of a lag indicator is still in sell. 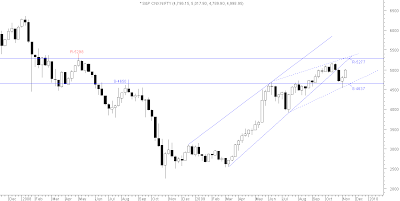 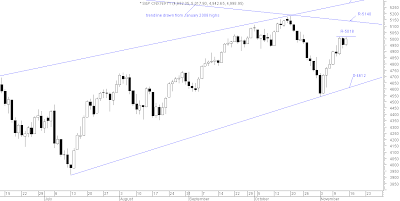 The daily charts show resistance at 5018 levels. Crossing this will take it to 5140 -5145 which is the target of the inverted head and shoulder pattern mentioned in earlier posts.This coincides with the resistance at 5140 from  down trendline from January highs.Among the oscillators the daily macd is in buy, Rsi14 is moving up above the 50 line and stochastics is in overbought  region.


Only a break above 5182 or  below 4538 can decide further direction. So one should trade in the direction of the short term  trend which is up and trade with caution till the high of 5182 is taken out..Holding the 4900 levels are once again crucial for the upmove to continue.

Is it possible for you to post the volume analysis as you had posted on OCT 31st and the day before muhurat trading?

Thanks a lot!
-Girish

will do it after this week ends. volumes of past week was average